The ability to grow replacements for failing body parts is rapidly approaching reality at the University of Minnesota’s new Stem Cell Institute. 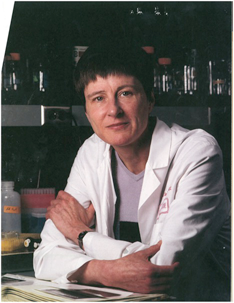 It was probably the best surprise Catherine Verfaillie, M.D., has ever had.

A professor in the Department of Medicine at the University of Minnesota, Verfaillie has seen plenty of unusual things in the dozen or so years she’s spent exploring the spongy marrow that fills our bones. But none beats what she and graduate student Morayma Reyes found growing in a culture dish one day in 1997.

Where they had a “planted” mesenchymal stem cells – cells found in marrow that typically give rise to bone – the researchers found not just bone cells, but cells that make up the lining of blood vessels as well. Curious, they began modifying the growing conditions – and soon found they could coax the culture into producing cartilage, heart, muscle, brain, and liver cells as well. It was as though they had stumbled upon a packet of magic seeds that, depending on where they were planted, could grow into carrots, broccoli, corn, or cabbage. END_OF_DOCUMENT_TOKEN_TO_BE_REPLACED

A life filled with enjoyment and caring

Inga was born in 1902 on a farmstead in Elizabeth Township. She was the youngest of eight children of Oscar and Kari (Jensen) Johnson. After completing grade school in Elizabeth, Inga went on to Park Region College in Fergus Falls and Dakota Business College in Fargo.

Early in her work life, Inga was employed as a cashier and stenographer at DeLendrecie’s Department Store in Fargo, and at the First National Banks in Mayville and McIntosh, North Dakota. Later, as a cook at Two Medicine Chalet in Glacier National Park, Inga began to enjoy photography and hiking in the mountains. END_OF_DOCUMENT_TOKEN_TO_BE_REPLACED

We’ve recently learned that sometime later this year Gillette Children’s Foundation will receive the largest single gift in its history. The gift comes as a part of the estate of Margaret and Leonard Anton of Sarasota, Florida.

Leonard (Tony) Anton came to the Gillette Children’s Hospital (Then called the State Hospital for Indigent Crippled and Deformed Children) in 1912 as a 6-year-old on the train from Duluth by an agent of the Humane Soceity (an important social service agency at the time). He was an only child. He was treated at our Lake Phalen facility over the next eight and one-half months for Osteomyelitis, (a bone infection). His father died the next year. While we don’t know much about his mother, Leonard’s wife has described his situation as that of a crippled orphan. Tony returned as a 9-year-old and remained at Gillette for another three years an two months. Mary Kelleher, a family friend, reports that Tony met a man while at Gillette who took an interest in him and was instrumental in getting an education at Harvard University where he took an undergraduate degree.

Peggy grew up less than a mile from Gillette’s Children Hospital in what was then known as the Rice neighborhood. She was an only child. Her dad was a salesman for Griggs and Cooper, then a wholesale grocer. She attended St. Joseph’s Academy (a Catholic girls’ school) in St. Paul. She then attended the College of St. Catherine (also in St. Paul) for a couple of years before going to work for her uncle at Midway National Bank. Tony and Peggy met when they both worked for the State of Minnesota, we suspect in the mid-1930’s. We believe that Peggy worked for the University of Minnesota at one time. END_OF_DOCUMENT_TOKEN_TO_BE_REPLACED

This month we take the pleasure in introducing two Minnesota Orchestra Laureate Society members, Truman and Leila Jeffers, who have attended Orchestra concerts for 50 years. We thank them and their fellow supporters, who make excellence possible through their generosity.

A LOVE FOR MUSIC

Truman “Jeff” and Leila Jeffers were students at Macalester College in St. Paul when they first became acquainted with the Minnesota Orchestra (then called the Minneapolis Symphony). “We were members of the concert choir,” Leila recalls, “and we sang with the Minneapolis Symphony under the direction of Antal Dorati. When we began going to concerts as audience members, we attended at Northrop Auditorium. We followed the Orchestra from Northrop to Orchestra Hall, and from St. Catherine’s to the Ordway.” END_OF_DOCUMENT_TOKEN_TO_BE_REPLACED

George was born in Eldridge, N.D. and grew up in Alexandria, MN. Shirley was born in Tracy, MN and also grew up in Alexandria. They met in 1957 and were married in Minneapolis in 1961. Shirley graduated from the Northwestern Hospital School of Nursing. George graduated from Gustavus Adolphus College with a bachelor’s degree in Business Administration.

George and Shirley have lived in St. Cloud since 1971. It was important to them to have a thriving community in which to live and raise their children.

George was first introduced to the Central Minnesota Community Foundation in January 1993 when, as president of G.R Herberger’s Inc., he signed an agreement establishing the G.R. Herberger’s Foundation Fund.

George was very successful in his business career and retired as President and COO of G.R Herberger’s Inc. in 1994. George has served on the Board of the Central Minnesota Community Foundation and as Chairman of the Board.

In 1996, they decided to establish an endowed scholarship fund in honor of Shirley’s career as a nurse. The fund provides a scholarship for a career in nursing. Each year, a student pursuing a degree in nursing will benefit from their generosity. END_OF_DOCUMENT_TOKEN_TO_BE_REPLACED